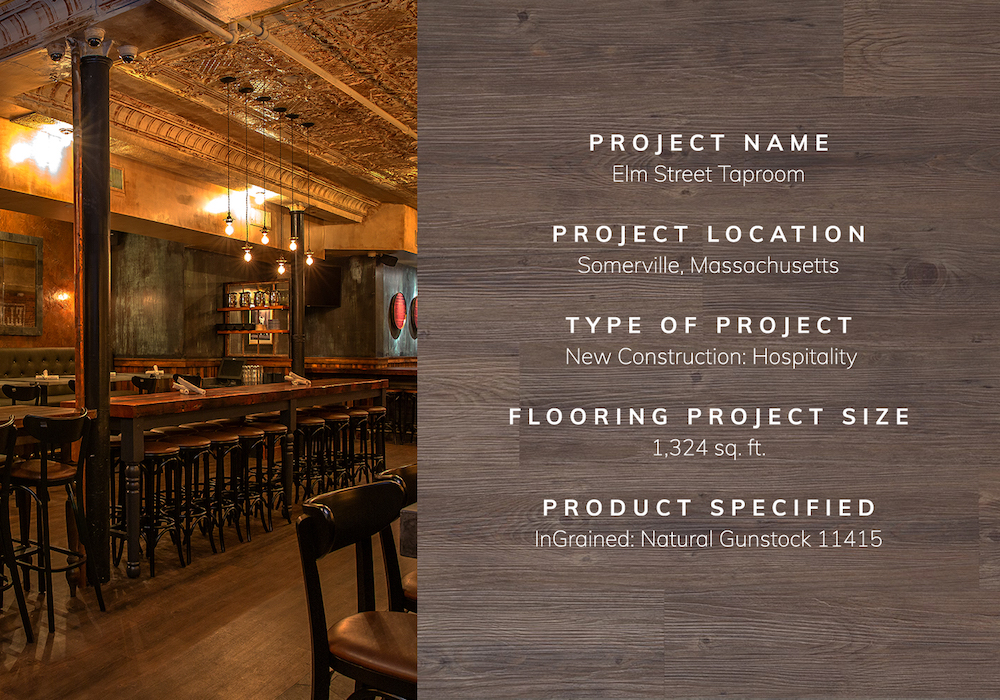 256 Elm Street in Somerville, MA is now the proud home of the Elm Street Taproom. Boston’s own Hawkeye Hospitality Group chose this prime real estate in Somerville’s Davis Square to open their bar and restaurant that “blends the best of the modern craft beer movement with a familiar, vibrant, social atmosphere.” The location had previously housed a bar and restaurant space for the last 20 years and before that a department store, so a renovation was required, with just a few months to complete the project.

The owners turned to Assembly Design Studio and Lead Designer Erica Diskin to capture the comfortable-yet-elevated local tavern feel they were looking for. After touring the old restaurant, Diskin used the pre-existing tin ceilings and exposed brick to draw a road map for the project.

Her end goal? “A comfortable place for all ages and types, but with that elevated feel so people could tell the owners put time and thought into their customer base.” 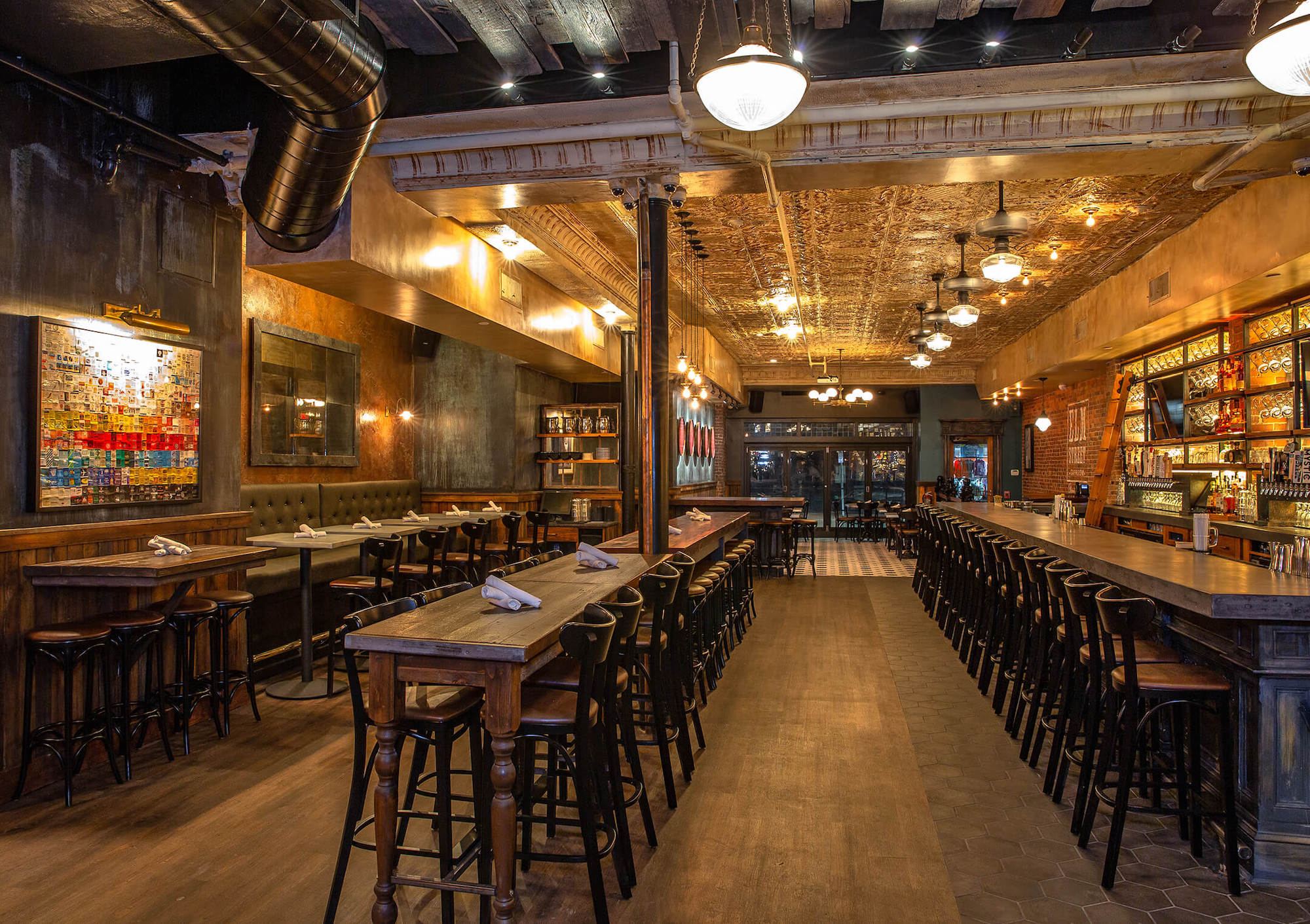 Because the Assembly Design team was redesigning an old restaurant, they had to go to great lengths to make sure it looked like a completely different space. They wanted customers to feel an “Elm Street Taproom” vibe, rather than relate back to previous establishments.

“When you’re coming into an existing restaurant, it’s challenging to figure out your approach to changing everything and making sure it does look different once you’re done with the renovation,” said Diskin.

Another obstacle was the actual layout of the space. The previous restaurant had the bar in the middle of the room, which took up a great deal of space and took away from the restaurant aspect. For Elm Street, Diskin reconfigured the room with the bar on one side, which left ample room for a dining area and ultimately plenty of floor space. “Determining what was going to be the most cost-effective, yet beautiful flooring option in that space was a large piece of the project,” she said.

For the overall feel of the Elm Street Taproom, Diskin was inspired by New York City restaurants in the West Village that have been around for years but continue to attract new customers. Her challenge was to create a brand-new restaurant that could give customers the impression it had already been there for decades. 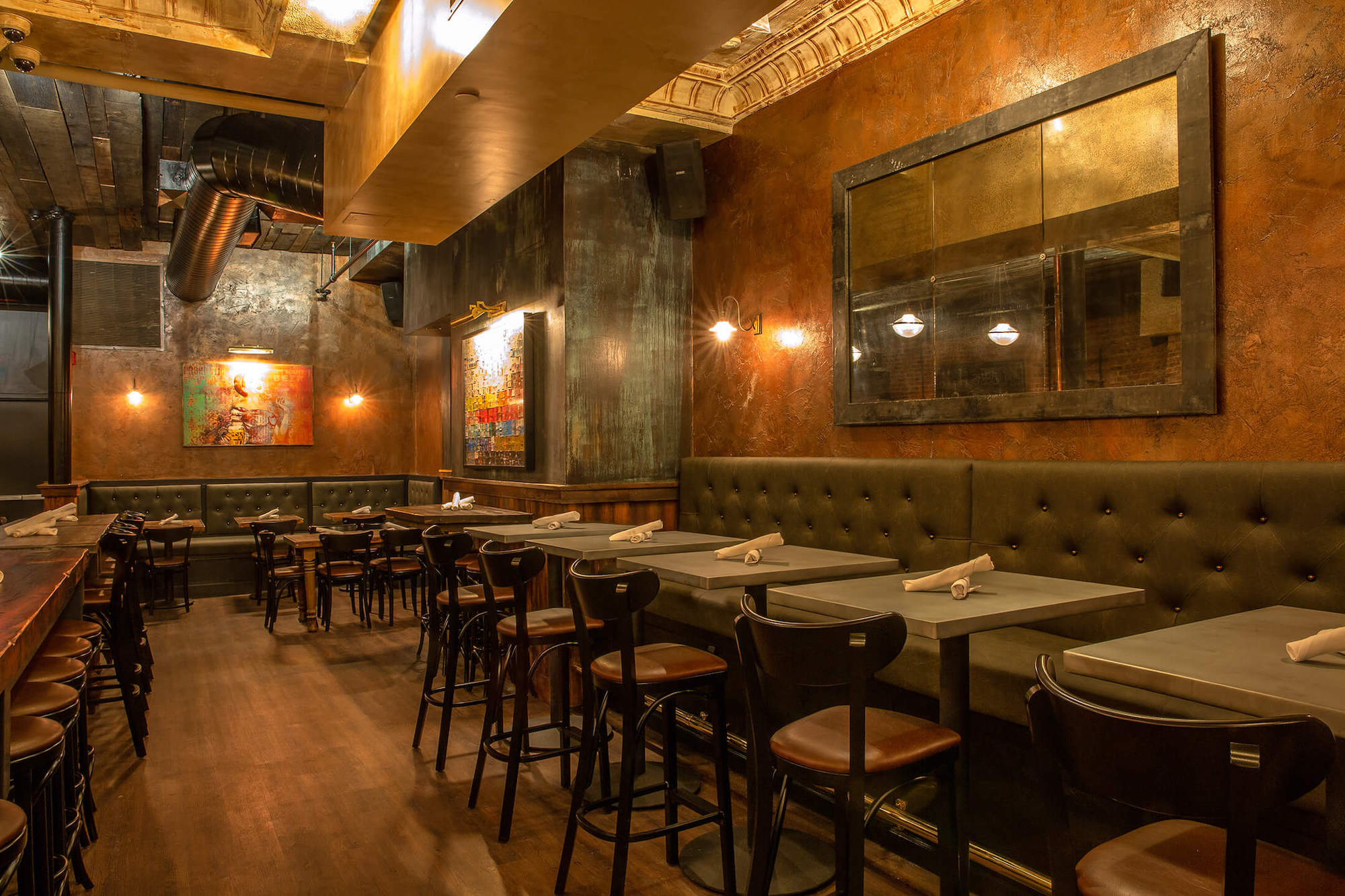 To achieve the old-meets-new and overall repurposed feel, Diskin incorporated many design elements and touches that marry historic and modern eras. Concrete bar tops and zinc table tops, reclaimed lighting from the 1930s and 1940s, and repurposed Polish scaffolding from the 1900s were all selected for various installations in the Elm Street Taproom. Diskin even brought in local artist Markus Sebastiano to create customized painted artwork that fit the overall aesthetic.

When it came time to choose flooring, Diskin turned to luxury vinyl. “I work with LVT so much now that it is one of my easiest go-to products. I have comfort selling it to a client because I know it’s going to be a durable product that’s going to last in such a high-volume traffic situation that bars always have.”

Having worked with Parterre in the past, she already had samples on-hand, including the wood-look InGrained Natural Gunstock that they ultimately settled on. Diskin noted how authentically it mirrored the look of natural wood, but at a more affordable price. “The price point was great, the look was great and my client liked that it was going to last.”

Because the project was pressed by a tight deadline, luxury vinyl flooring was even more appealing because of how easy it is to install. Ultimately, the InGrained 3mm plank was installed in the dining area and flowed seamlessly alongside the hexagonal and mosaic tiles used in the bar and café areas.

Since opening its doors in January 2019, Elm Street Taproom has been busy hosting patrons and adding members to their exclusive mug club – available only to those who sample every beer offered by the Taproom. (But not to worry, luxury vinyl holds up great and cleans easily when it comes to spills.)

Diskin and Assembly Design Studio enjoyed the entire design process, especially working with Parterre. “There’s such a great selection with Parterre; I can pull my samples and show clients a wide variety,” she said. “The minute they decide, I send an email to Parterre. Ordering is very easy and lead time is never an issue – it’s just a great process.”

A natural, well-balanced collection perfect for elevating any space If you’re looking to bring a rustic, comforting atmosphere to your next project, we invite you to explore the inspiration of Nurtured, one of Parterre’s three new engineered wood flooring collections.